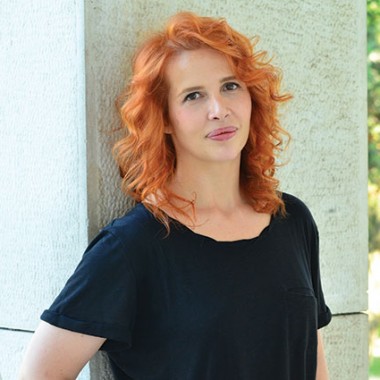 Ivona Juka is the author of award-winning short films „Garbage“ and „Editing“, which was selected in Official competition of numerous A festivals in the USA. She was selected by European Film Academy as one of 5 European students to make short film for awards ceremony in Berlin, and to participate at the EFA conference «Cinema of Tomorrow» in Warsaw as one of the most perspective young directors in Europe.

Ivona Juka is the scriptwriter and director of full-length creative documentary „Facing the Day“, the most awarded Croatian documentary film. It was awarded as Best documentary at goEast FF in Wiesbaden, DokMa FF, Sarajevo FF and by Croatian Film Critics and won Grand Prix at Croatian Film Days. Film had very successful cinema distribution in Croatia, BiH and FYROM.

Ivona Juka is a member of the European Film Academy.

Ivona Juka received the City of Split Award for the Best Script for “You carry me” as well as „Branko Bauer“ award from Croatian Film Directors' Guild; and in Germany she was granted a fellowship from the NIPKOW PROGRAM – well known German program for media professionals. “YOU CARRY ME” received éQuinoxe Master Class scholarship as one of the 10 best European projects. YOU CARRY ME won support of the Eurimages.

- OKTAVIJAN for the Best Documentary – Award by Film Critics        Society

2010 – eQuinoxe Master Class - 7.Intl Screenwriters Workshop. Ivona was chosen as one of 10 most talented European scriptwriters. Master class was held by awarded lecturers and each participant had private one on one Class with lecturers which were chosen by the Administrative Board of the organizer according to the project and previous work of the workshop attendants. Ivona’s lecturers were:

Anthony McCarten – scriptwriter, director, producer. His play „LADIES NIGHT“ was translated to 12 languages and plays worldwide. In 2001 he received Moliere Prize in france for Best Comedy. He did numerous adaptations of novels for film. He directed „VIA SATELLITE“, which is adaptation of his play. Film was in official selection of numerous festivals: Cannes, London, Seattle, Toronto etc. His latest script about prof. Sthephen Hawking and his first wife, under the working title „THE THEORY OF EVERYTHING“ is in pre production in Hollywod.

Cinema of Tomorow – selected to be participant in Warsaw of European Film Academy conference. She was invited to take part at EFA conference „Cinema of Tomorrow“ in Warsaw as one of the top ten young award-winning directors in Europe – directors of tomorrow.