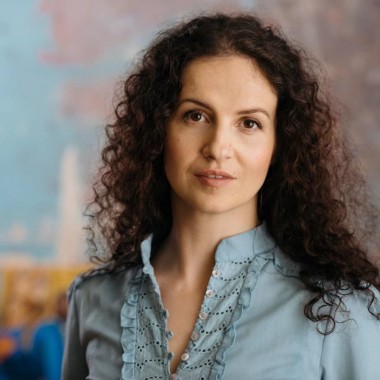 Anita Juka is a successful producer who started her own production company 4Film in 2003. In her 17 year career, she has produced 16 films and 9 European co-productions of different genres, including feature fiction, creative feature documentaries, shorts and recently one mini TV series. To her professional background a large number of produced European social awareness media campaigns and film literacy campaigns can be added, as well as 15 different international programs including Producers Lab Toronto, TransAtlantic Partners, eQuinoxe, Screen Ireland etc.  Her films have been supported by Eurimages, won more than 70 awards at film festivals and were distributed in more than 190 countries worldwide.

Her most successful film is “You Carry Me”, directed by Ivona Juka. This strong drama has had its international premiere at Karlovy Vary International Film Festival, it has been invited to more than 20 film festivals around the world and been awarded with 17 international awards. “You Carry Me” was competing for the title of the Best European Film of 2015 and it was also the official entry for the 88th Academy Awards® for the Best Foreign Language Film. During the Oscars® campaign, the film was  applauded by Variety and The Hollywood Reported, which led to Netflix noticing the remarkable „You Carry Me“ and offering to buy world rights. In 2016, „You Carry Me“ became the first film, not only from Croatia, but from the whole region, to be bought by the gigantic VOD service – Netflix and at this point, it is available for 167 million people to watch.

Anita Juka has also produced  “Here” (by Zrinko Ogresta) which won Crystal Globe at 39th Karlovy Vary IFF, “Slovenian Girl” (by Damjan Kozole, delegate producer: Dane Hocevar) which was distributed in 18 countries worldwide, and “Facing the Day” (by Ivona Juka) which became the first feature documentary to ever win the Heart of Sarajevo at Sarajevo Film Festival.

She has produced the most successful Croatian fiction and creative documentaries that have won numerous awards at international festivals, but also achieved significant theatrical distribution in the Balkan countries. Among these are the creative documentaries “Facing the Day”, “Bad Blue Boys” and “Blue Rose Garden“.

She produced anthology film “Some Other Stories” which was presented at 30 International Film Festivals, and won four international awards. The goal of the film was to empower female directors from Balkan countries by making an anthology film with each story beign from a different ex-Yugoslavia country.

In 2019, Anita was selected as one of the 20 best European producers by European Film Promotion program – Producers on the Move.

She is also working as an expert associate in Forbes Croatia.

Anita Juka is a board member of the European Film Academy.

The Festival of Slovenian Film Portorose, 2015

“I need to concentrate” one-minute version of the “Romkom”

2010 – “View from a Well”, short fiction film that is part of “Some Other Stories”, anthology film, director: Ivona Juka, producer: Anita Juka

The anthology film „Some Other Stories“is invited to over 30 international film festivals until now, including:

Television broadcast in Croatia and on YLE

Cinema release in Croatia and Macedoina, planned in Serbia, Bosnia and Herzegovina,

TV distribution in Croatia and Bosnia and Herzegovina.

- Sarajevo Film Festival – Heart of Sarajevo for the Best Documentary

2017.- „The Path of Mine, Client: Hrvatski centar za razminiravanje – documentary film about landfill in Croatia.

2016.- „Working without mobbing“ – Client: NGO Mobbing - awareness raising media campaign about the right to work in an environment free from bullying, harassment, discrimination and violence

2009 – “I need Love! – media campaign against corporal punishing of children for Ministry of Family, Veterans’ Affairs and Intergenerational Solidarity, part of international Council of Europe Campaign

2009 – “Get Involved!” – media campaign for participation of women in politics, co-financed by Embassy of Finland, Royal Netherlands Embassy, City of Zagreb and Government of Croatia Office for Gender Equality

2008 – “They Can Do Everything!” – media campaign for inclusion of women with disabilities in social life, financed by Ministry of Family, Veterans’ Affairs and Intergenerational Solidarity and City of Zagreb

2008 – “Report Trafficking in Human Beings” – media campaign for Ludwig Boltzmann Institute for Human Rights from Vienna, Austria, and Government of Croatia Office for Human Rights, financed by the European Commission

2005 – “Stop Trafficking in Human Beings”, for Government of Croatia Office for Human Rights

2005 – “Croatia - Mediterranean As It Once was”, for Croatian Tourist Board

2004 – “Stop Trafficking in Human Beings”, for Government of Croatia Office for Human Rights

2016- Toronto Producers Lab - an international co-production forum that gathers experienced feature film producers from across Canada and Europe where they discuss projects, build knowledge, grow relationships and support partnership-building for the financing, production and distribution.

Anthony McCarten – scriptwriter, director, producer. His play „LADIES NIGHT“ was translated to 12 languages and plays worldwide. In 2001 he received Moliere Prize in france for Best Comedy.  He did numerous adaptations of novels for film. He directed „VIA SATELLITE“, which is adaptation of his play. Film was in official selection of numerous festivals: Cannes, London, Seattle, Toronto etc. His latest script about prof. Sthephen Hawking and his first wife, under the working title „THE THEORY OF EVERYTHING“  is in pre production in Hollywod.